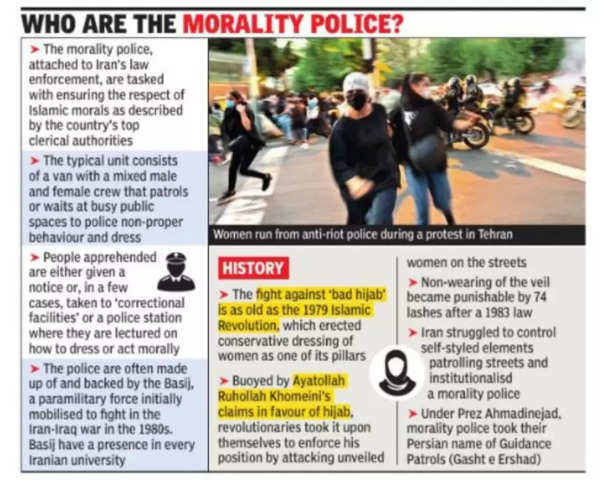 Iran faced international criticism on Tuesday over the death of a woman held by its morality police, which ignited three days of protests, including clashes with security forces in the capital and other unrest that claimed at least three lives.
The UN human rights office called for an investigation. The UScalled on the Islamic Republic to end its “systemic persecution” of women. Italy also condemned her death. Iran’s foreign minister Hossein Amirabdollahian rejected the criticism, accusing the US of “shedding crocodile tears. ”
Separately, an Iranian official said three people had been killed by unnamed armed groups in the Kurdish region where the protests began, the first official confirmation of deaths linked to the unrest.

Later on Monday, the semiofficial Fars news agency reported that small groups of protesters had again gathered in downtown Tehran, chanting “Death to the dictator”. It said the crowd numbered around 300 and that the protesters damaged street signs. Videos posted on social media have shown demonstrations in numerous cities, with women waving their headscarves and protesters facing off with security forces.
The UN body said Iran’s morality police have expanded their patrols in recent months, targeting women for not properly wearing the hijab. It said verified videos show women being slapped in the face, struck with batons and thrown into police vans for wearing the hijab too loosely. A similar patrol detained 22-yearold Mahsa Amini last Tuesday, taking her to a police station where she collapsed. Shedied three days later. Iranian police have denied mistreating Amini and say she died of aheart attack. Amini’s father has said his daughter had no health problems and she had suffered bruises to her legs. An investigation is on.