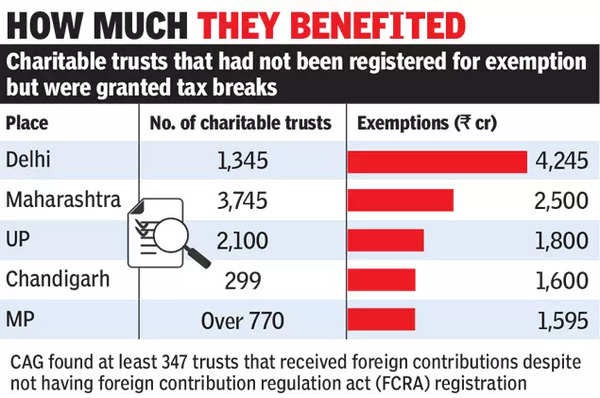 NEW DELHI: A comptroller and auditor general (CAG) report on the income tax department has revealed that more than 21,000 charitable trusts, which had not been registered for exemption, were granted tax breaks of Rs 18,800 crore between assessment year (AY) 2014-15 to 2017-18.
The highest exemptions of Rs 4,245 crore were availed by 1,345 such trusts based in Delhi, followed by Maharashtra where 3,745 trusts were allowed exemption of Rs 2,500 crore, over 2,100 trusts in UP availed Rs 1,800 crore tax free income, while 299 trusts in Chandigarh for Rs 1,600 crore. Madhya Pradesh had more than 770 such trusts availing exemption of over Rs 1,595 crore and over Rs 1,000 crore exemptions each claimed by trusts under similar conditions in Gujarat, Andhra and Karnataka. Interestingly, the auditor, in its report tabled in Parliament on Monday, found at least 347 trusts received foreign contributions despite not even having foreign contribution regulation act (FCRA) registration.

India has a $1.2 trillion plan to snatch factories from China