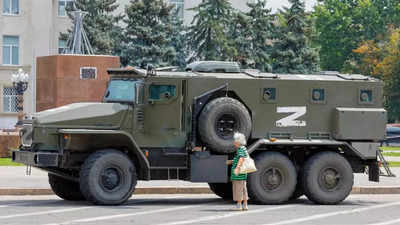 KYIV: Ukrainian forces have recaptured more than 40 settlements in the key southern region of Kherson, as Kyiv looks to drive back Russian troops in a counter-offensive, the local governor said Monday.
Moscow seized almost all the territory of the economically and strategically important region bordering the annexed Crimea peninsula during the first days of its invasion which began on February 24.
But in recent weeks the Ukrainian army, bolstered by deliveries of Western-supplied long-range artillery, have sought to stage a counter-offensive in the area.
Kyiv’s forces have been carrying out strikes on Russian military warehouses and positions behind the front line and hit bridges acting as crucial supply routes for Moscow’s troops in the city of Kherson.
“Today, 46 settlements have already been de-occupied in the Kherson region,” Dmytro Butriy, the head of the Ukrainian regional administration, told national TV.
Butriy added that the majority of the regained villages lie in the northern part of the region, while some others are located in its southern part, close to the Black Sea and the heavily bombarded Mykolaiv region.
The governor said that some of the recaptured villages “have been 90 percent destroyed and today are still under constant fire”.
Butriy said that the humanitarian situation in the region was “critical” and reiterated the authorities’ call to those who still remain in the area “to evacuate to safer regions”.
Last month, a Ukrainian official vowed that the Kherson region would be recaptured by Kyiv’s forces by September.
Russian forces seized the region’s capital, also called Kherson, on March 3, the first major city to fall to the Russian hands since the start of the invasion.