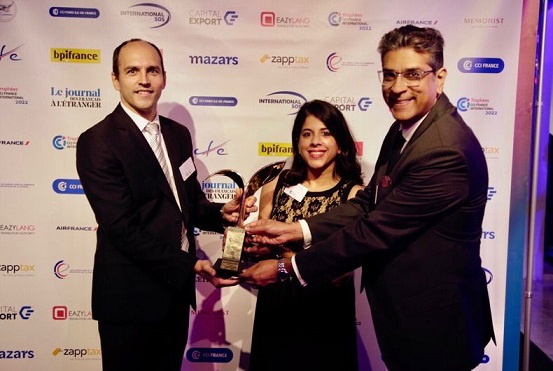 The Indo-French Chamber of Commerce & Industry (IFCCI) was awarded for the Best Solidarity Initiative by the CCI France International at the Annual Awards Ceremony ‘Trophees des CCIFI‘ held in Paris last evening. The CCI France International comprises a network of 124 French Chambers in 95 countries and this was the only award presented to a French chamber during the ceremony. IFCCI has consistently been putting India on the map with its performance and efforts for forging Indo-French business and economic ties. It is currently India’s most active bilateral chamber and has previously won two awards in 2018 and 2019 for Best Performance and Best Contribution respectively.

The award was received by Ms. Payal S. Kanwar, Director General and Mr. Sumeet Anand, President, IFCCI and the event was attended by 500 global leaders from more than 70 countries in the presence of Mr. Frank Riester, Honorable Minister of Foreign Trade and Economic Attractiveness. The annual awards ceremony of the CCI France International aims to recognize excellence of French companies abroad.

On this occasion, the Ambassador of France to India, H.E. Mr. Emmanuel Lenain, said, “I warmly congratulate IFCCI and its members for this well-deserved award. The fact that, among all French Chambers in the world, IFCCI carried out the most outstanding COVID-19 solidarity initiative of all shows how much French companies in India care about their host country and the Indian people. They have chosen to invest, produce and innovate in India and are here for the long run. This commitment marked by solidarity mirrors the excellence of political relations between France and India.”

During the second wave of COVID-19 in India, France supported India with a massive solidarity mission launched at the request of the President of the French Republic. The operation was implemented by the Embassy of France in India led along with IFCCI and Team France. During this mission, a total of 55 crores (6.1 million euros) were raised from 55 French and Indian groups for donating 29 state-of-the-art French-made oxygen generating plants to Indian hospitals across the country. Each of these plants makes a 250-bed hospital fully autonomous in oxygen supply. In addition, IFCCI, in partnership with Business France and Ador Powertron, successfully coordinated the delivery of 537 oxygen concentrators from Montpellier, France, to India. The concentrators were dispatched to various locations across the country.

Speaking on the sidelines of the event, Ms. Payal S. Kanwar, Director General, IFCCI said, “IFCCI is extremely proud to receive this prestigious award on behalf of its contributing members and Team France. The unanimous support of our member companies towards the French Solidarity Mission enabled us to make a large impact and help strengthen the healthcare infrastructure in India during the most challenging phase of COVID-19 in India. This shows how deeply our member companies are committed to India.”

Guests present at the India table

India has a $1.2 trillion plan to snatch factories from China

Number of credit cards shrink by 23 lakh in a month