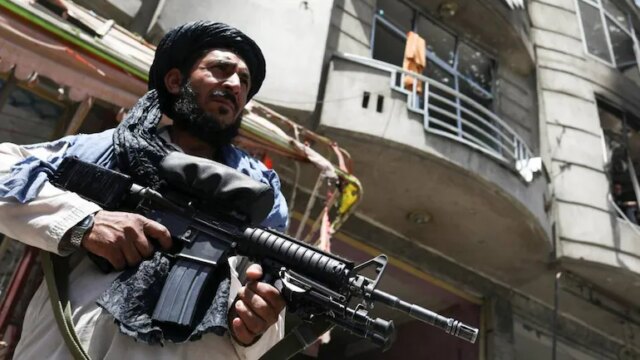 IS said the attack was in response to “insults levelled at the Prophet by an Indian government spokewoman”. They said that Taliban fighters tried to protect the temple for three hours but they targeted the fighters with explosives. A Taliban fighter stands guard at the site where an explosive-laden vehicle detonated amidst an attack on a Sikh Temple in Kabul, Afghanistan. (Photo: Reuters)

The Islamic State Khorasan Province (ISKP), while claiming the responsibility for attack targeting a Gurdwara in Kabul, said that it was led by Inghimasi Abu Mohammad Al-Tajiki. Militants fought for more than three hours with Taliban fighters who tried to intervene to protect the temple, targeting them with four explosive devices and a car bomb, the militant group said on an affiliated Telegram channel.

The dreaded terror group said one of its fighters “penetrated a temple for Hindu and Sikh polytheists” in Kabul, after killing the guard, and opened fire on the worshippers inside with his machine gun and hand grenades.

Several blasts tore through Gurdwara Karte Parwan in Kabul’s Bagh-e Bala neighbourhood on Saturday while Afghan security personnel thwarted a bigger tragedy by stopping an explosive-laden vehicle from reaching the place of worship of the minority community in the war-torn country.

GST mop-up in September at Rs 1.47 lakh crore; festive season to push up...

Nord Stream pipeline Leak: What has unfolded so far

Hrithik Roshan on doing Vikram Vedha: ‘Ensemble films pushes you to do better’