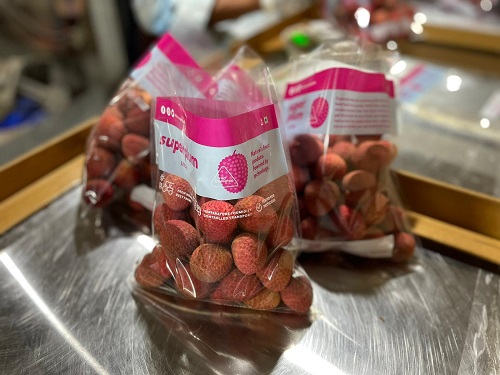 India proudly wears the crown of being the largest producer of litchi in the world, with Bihar topping the states in terms of production. In 2018, Shahi Litchis from Bihars Muzzafarpur district became the fourth agricultural product from the state to receive GI certification.

However, transporting litchi is difficult due to its low shelf life. In 2013 alone, the total loss in the litchi supply chain ranged from 35.3% to 43.8% – a true tragedy for this tastiest of fruits. This still stands true even though consumer demand for the fleshy fruit remains high.

Now, Superplum, an Indian Agritech company, has built the country’s first modern supply chain to deliver fresh litchis from farms in Muzzafarpur to all over the country. For the first time in India, litchis are being chilled, trimmed, cleaned and packed at the farm level to retain freshness. They are then transported using Superplums Fresherator, a proprietary IoT-based transport system that keeps the fruits fresh in an environment that can be remotely monitored and controlled.

In the past, some litchis would go through a sulphitation process to increase their shelf life but this process made the fruit unfit to consume, due to which it has been banned in several countries. With a promise to deliver safe-to-eat fruits, Superplum employs science and technology to increase the shelf life of litchis through a proprietary multi-faceted approach.

While these Muzzafarpur Litchis are currently being delivered to stores and homes in Delhi, Gurgaon, Noida and Bengaluru, the company plans to expand their delivery across the country and the world.

Superplum, a start-up backed by some of Silicon Valleys most notable investors, has been addressing Indian agricultures endemic issues since 2020 by building the countrys most sophisticated supply chain for fresh produce. The company works with farmers across India to ensure product quality right from the source. Their fruits are delivered to over 350 stores in Delhi-NCR and Bengaluru, including Spar, Lulu Hypermarket and Star Bazaar, among other local retail shops. With a fully digitised system, each product is fully traceable from farm to the consumer via a QR code seamlessly integrated into their vibrant packaging.

Online Marketplace for Preloved Books "What's In Your Story" Inaugurated During the Mysuru Startup...

Paytm at near 6-month high as quarterly revenue surges