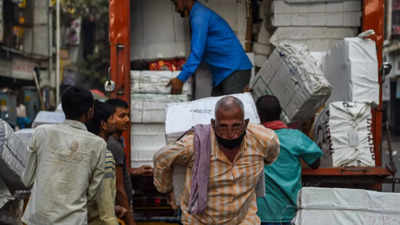 NEW DELHI: The export duty hikes and tax cuts will likely hurt economic growth and raise the chances of the fiscal deficit widening, but do little to bring down retail prices within the central bank’s tolerance level, economists and industry officials said.
Over the past month, India’s fiscal and monetary policy have U-turned from being growth-focused to honing in on inflation – with the central bank raising the key interest rate by 40 basis points, and the government cutting taxes on fuel and disincentivising exports.
“The measures announced mark a tacit admission by the government that both fiscal and monetary policies are set to be deployed to bring inflation down,” said Sonal Varma, an analyst at Nomura.
Still, despite government intervention, India may end up with retail inflation at least 100 basis points above its 6% tolerance level, as key food prices are likely to be on the rise, economists at banks like HSBC and Nomura said.
The moves could hurt growth and the fiscal deficit could widen by 40-50 basis points, they said, despite the central bank governor saying India was likely to achieve its fiscal deficit target at 6.4% of GDP.
Higher borrowing costs due to rate hikes and measures such as export taxes which could slow capital spending will hurt growth prospects, said Suvodeep Rakshit of Kotak Economic Research.
“The recent setback to growth and uncertainty on consumer demand is likely to push the revival in the private investment cycle further away,” Rakshit said.
He kept his inflation projection unchanged at 7.2% for 2022-23.
India imposed an export tax of 15% on 11 steel products and raised taxes on iron ore exports, effectively slowing exports of such products, months after pushing companies to boost capital expenditure and exports.
“This will discourage capital expenditure in this country. People started to invest in capex, and it was not designed to service the domestic market,” V R Sharma, managing director of Jindal Steel & Power, told Reuters.
Sharma said the move drives the industry away from boosting exports and helping the government achieve its $1 trillion export target by 2030, from $669.65 billion in 2021-22.
A basket of iron and steel products recorded the second highest rate of growth among all major commodities during the year ended March 2022, and accounted for 7.5% of all exports.
The government’s earlier move to ban wheat exports will also hurt exports and growth, Christian de Guzman of Moody’s Investor Service said.
Sticky inflation
The government had planned Rs 7.5 lakh crore ($96.61 billion) of spending in infrastructure in 2022-23 that kicked in from April 1, to revive the pandemic-hit economy.
But after retail and wholesale inflation hit multi-year highs in April, the government cut taxes on petrol and diesel, taking a revenue hit of 1 trillion rupees, and will take a hit of another Rs 2 lakh crore if the situation worsens. read more
The cost of fighting inflation could account for nearly 8% of total expenditure planned for the current fiscal year.
Petrol has a 2.2% weighting in the consumer price inflation basket, while diesel has a much lower weighting of 0.15%, and economists said that it will not impact moderating retail inflation by more than 50 basis points in the coming months.
Economists expect an upside risk to inflation due to a rise in food prices and electricity tariffs, and higher input costs for firms, to offset the measures taken by the government.
“Higher food inflation, a pending rise in electricity tariffs, the continued passage of higher input costs from firms to consumers and other second-round effects are likely to drive inflation,” Nomura’s Verma said.

China one of the freest societies in the world: Video of Nancy Pelosi’s gaffe...

With eye on 2024 polls, BJP plans to expand base among Yadavs, Pasmanda Muslims