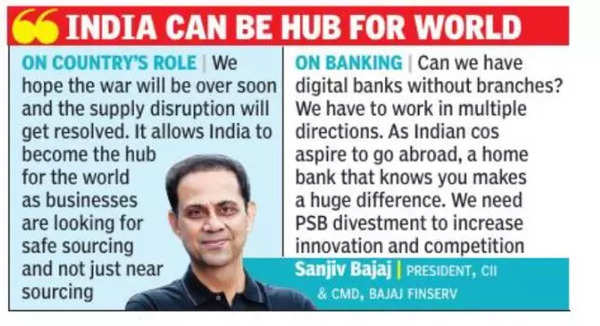 Sanjiv Bajaj, chairman and managing director of Bajaj Finserv, has taken over as the president of industry lobby group, the Confederation of Indian Industry (CII). In an interview to TOI, Bajaj talks about the investment cycle against the backdrop of the turbulence in global economy:
Growth projections hinge on oil prices. Anything the government can do to overcome this dependence?
There is not much that the government can do in the short term because the price is where it is. When oil prices came down, we saw taxes increase, creating additional buffers for the government. The time is now for the central government to collaborate with states to cut taxes to decrease the price impact on common man & businesses and reduce inflation. In the medium term, we have to diversify our sources and streamline laws to make setting up renewable energy projects more attractive.

Would you push for petroleum products in GST?
We believe both need to be done: Under the current structure, we would recommend that the taxes be brought down and then move towards a situation where we include oil in GST.
Any other measures government can take to reduce supply side pressure?
Staywith expanding the economy and continue investing in real assets and infra projects. Let’s hope that the monsoon, which we expect to be normal, eases food prices. Certain nonagrisectors will need support.
When do you think the investment cycle will pick up given that interest rates are set to rise?
The government, besides asking the private sector to get their animal spirits going, has done a lot with the PLI (production-linked incentive) scheme, cutting corporate tax rates and credit-enhancement schemes for MSMEs. Capacity utilisation has gone up to 70-72%. Typically, as it gets closer to 80%, new investment starts. There are two issues — uncertainty due to the war, and supply chain disruptions. We hope that the war will be over soon and the supply disruption will get resolved. It also allows India to become the hub for the world as businesses are looking for safe sourcing and not just near sourcing, and India can stand on top of the list.
Do you still see the trust deficit continuing between industry and government?
We have seen a clear demonstration of increased trust from the government. They have taken suggestions from industry on decriminalising and removing obsolete regulations. There is more frequent engagement between government and industry. The government from the senior-most post recognises role of private sector.