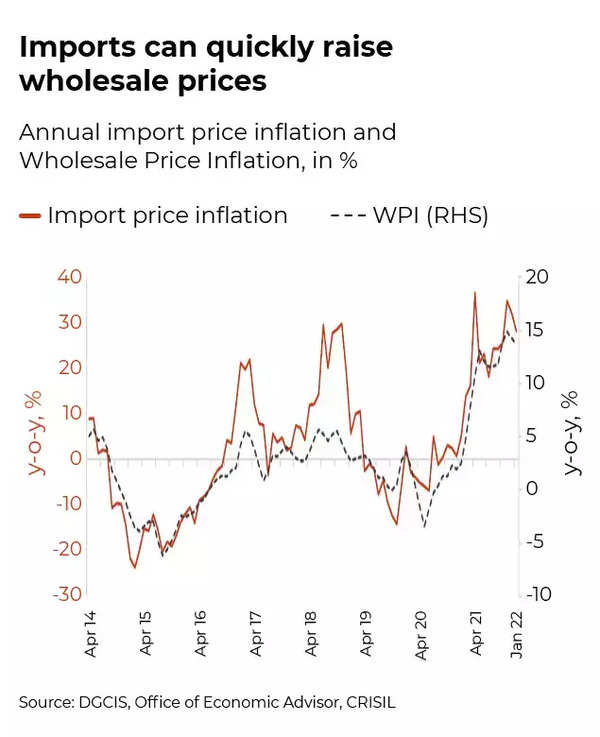 NEW DELHI: At a time when major economies are bracing up with measures to control soaring prices of essential commodities, a report by State Bank of India (SBI) economists cautioned that India’s inflation internals are much different than those of advanced economies like the US.
Even though the Reserve Bank of India (RBI) took the markets by surprise with an off-cycle move to raise its key policy rates earlier this month and is poised to raise it further in the coming monetary policy meets, the report suggests inflation will take time to moderate in India.
Retail inflation soared to almost 8-year high of 7.79 per cent in April as against 6.95 per cent in March. The rise was caused mainly on account of jump in vegetable and fuel prices.

Amid continued inflation, the SBI report said it is now almost certain that RBI will raise interest rates in forthcoming June and August policy to pre-pandemic level of 5.15 per cent.
However, it sounded concern over whether such rate hikes will be effective in brining down inflation if war-related disruptions continue.
Imported inflation
The SBI economists said they did a study of the Russian invasion’s impact on inflation, which revealed that 59 per cent of the jump in prices is due to geopolitical events.
Using February as the base case, the report revealed that because of war alone, food and beverages, fuel, light and transport contributed 52 per cent of the increase, while another 7 per cent impact came from the jump in input prices for the FMCG sector.
Rising food prices have emerged as an overriding worry for consumers – already hit hard during two years of the pandemic – as prices of edible oil and vegetables have surged amid fears of a fall in wheat output this year.

Inflation in the food basket — which make up nearly half of the CPI — rose to 8.38 per cent in April from 7.68 per cent in the preceding month and 1.96 per cent in the year-ago month, showed the data released by National Statistical Office (NSO) showed.
In the ‘oils and fats’ category, inflation remained at an elevated level of 17.28 per cent (18.79 per cent in March 2022) during the month, as Ukraine is one of the major sunflower oil producers in the world and India imports a major portion of the commodity from the war-ravaged country.

In turn, high inflation, rising interest rates and diminishing foreign exchange reserves have pushed the Indian rupee to its lowest level against the US dollar.
To put it simply, the rupee and inflation numbers are adversely affecting each other, and thereby dragging the economy which was trying to recover from 2 years of pandemic slump.

A falling rupee means expensive imports, rising cost of foreign travel and study abroad. Apart from supply shortage caused by the war, the falling exchange rate has also made India’s import of crude oil more expensive. In the past too, domestic prices of goods jumped each time the rupee slumped.

Modest growth in wages
The report further noted that building wage pressures mirrored in the multi-decadal high annual wage growth are fuelling broad-based price pressures across all advanced economies.
This is the reason it termed Indian inflation to be different from other economies.
In India, the nominal rural wages for both agricultural and non-agricultural labourers picked up during the second quarter of FY22. This was mainly on account of easing restrictions by states with an aim to restore economic activity as Covid cases remained in control.
However, the reports stated that wage growth remained soft. The weighted contribution of wage growth in CPI build-up remains
modest.
Thus, even after rate hikes, inflation will take time to moderate in India, it added.
Disproportionate impact of inflation
Stating that the inflation is unlikely to correct anytime soon, the note said there is a difference between rural and urban areas when it comes to price rises.
The former are impacted more by higher food price pressures, while the latter are showing more impact because of the fuel price hikes.
For rural areas, the CPI inflation in food and beverages stood at 65 per cent as compared to 52 per cent in urban areas. Vegetable prices contributed the most to this in both categories.
Even spices and fuel & light were more expensive in rural areas as compared to urban.
On the other hand, cost of transportation, clothing, milk and cereals were higher in urban areas.

Inflation and growth
From October 1, 2019, all banks including SBI were mandated to lend only at an interest rate linked to an external benchmark, such as RBI’s repo rate or Treasury bills yield. As a result, monetary policy transmission by banks has gained traction.
Banks obtain funds from RBI at this repo rate. When RBI hikes the policy rate, it becomes expensive for banks to acquire funds from the central bank. This, in turn, forces them to raise their lending rates as well.
Hence, retail loans that are benchmarked to an external rate with a quarterly reset clause may rise directly with rise in repo rate, so there is 100 per cent transmission.
As of December 2021, 39.2 per cent of loans were benchmarked to external rates — mostly repo. The report noted that this will increase interest cost for consumers, thereby impacting demand.
On the flip side, the report said that in such scenarios depositors stand to gain as there could be an equally faster transmission.
It noted that the large share of public deposits in total liabilities for countries like India has had important implications for macro stability and policy transmission.
Firstly, with banks funding themselves through retail deposits, the source of vulnerability to external contagion is significantly reduced.
Second, only 1 per cent of the bank borrowings is currently at the policy rate of 4.4 per cent.
Thus, in earlier regime, when repo rate rate changed by 25 bps even under full transmission there could have been be at most a 15-basis point impact on deposit rates (25 bp*59 per cent interest sensitive time deposits) and thereby on lending rates.
While now, directly 25 bps will be transmitted in lending rates, which might impact borrowers.