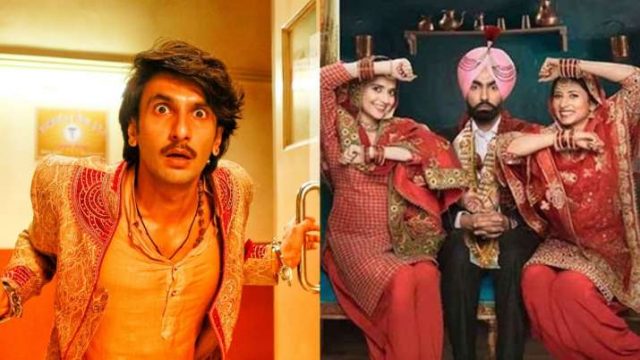 Jayeshbhai Jordaar Box Office Day 3: Ranveer Singh’s film was released this Friday and has been receiving mixed responses from the audience. The business that the film collected has been low as compared to the Punjabi film ‘Saunkan Saunkne’ which was also released alongside. Jayeshbhai Jordaar was one of the much-awaited projects of Bollywood yet it could not charm the moviegoers. The people who hit the theatres reached there after a word of mouth review. On the contrary, another regional film starring Ammy Virk, Sargun Mehta and Nimrat Khaira became the first choice for many. If reports are to be believed, JB directed by Divyang Thakkar could not live up to the expectations on Sunday as well resulting in an overall low first weekend. While, ‘Saunkan Saunkne’ remained on a record-breaking spree.

Jayeshbhai Jordaar, on Saturday, managed to rake in 4 crores. The numbers were shared by trade analyst Taran Adarsh through a tweet that read, “#JayeshbhaiJordaar picks up on Day 2, but not enough to recover lost ground due to an extremely low start on Day 1… Eyes ₹ 12 cr [+/-] total in its weekend, a dismal number for a film starring a prominent name… Fri 3.25 cr, Sat 4 cr. Total: ₹ 7.25 cr. #India biz.”

Coming back to Sunday, it is being said that the film will Rs 4.45 crore on Day 3, taking the total box office collection to Rs 11.70 crore. The film had a total 17.64 per cent Hindi occupancy on Sunday, May 15. Various industry experts have predicted if the film failed on its first Sunday, the it will be tough to regain during the weekdays, in the similar manner like that of Shahid Kapoor’s Jersey.

Coming to Saunkan Saunkne, sharing the numbers of the first day, Taran wrote, “#Punjabi film #SaunkanSaunkne springs a wonderful surprise, takes a SMASHING START on Day 1… The numbers are a morale booster for the #Punjabi film industry… The word of mouth is terrific, a solid weekend total is on the cards… Fri ₹ 2.25 cr.”

Speaking about its records, BoxOfficeIndia stated, “Saunkan Saunkne crossed the 3 crore nett mark across India as it collected 3.10 crore nett beating the 3 crore nett Shadaa had collected on its second day in 2019. The two day collections of the film are 5.25 crore nett which is fantastic. The film is doing superb business across East Punjab and Delhi NCR and should emerge a BLOCKBUSTER film though Monday will tell where it will go.”

Jayeshbhai Jordaar happens to be a comedy-drama which is produced by Aditya Chopra and Maneesh Sharma under Yash Raj Films. The film stars Ranveer Singh in the titular role as the son of a traditional Gujarati sarpanch, who believes in equal rights between males and females in society.

War-damaged Russian tanks to go on display in Polish square