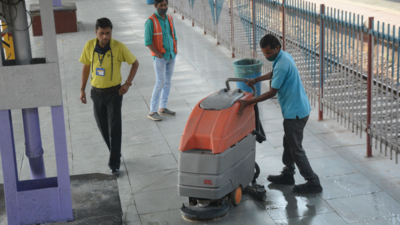 NEW DELHI: Indian Railways has abolished nearly 72,000 posts of Group-C and Group-D categories in the last six years, which include peons, waiters, sweepers, gardeners and primary school teachers. According to official documents, the 16 zones of railways had proposed to surrender 81,000 such posts for these categories from 2015-16 to 2020-21.
Officials said these posts are non-essential and these have little relevance considering the change in work culture and technology adoption. So far 56,888 such posts have been surrendered by the zonal railways and the rest 15,495 are scheduled to be surrendered. Data shows that the northern Railways has surrendered more than 9,000 posts while in the south eastern Railway 4,677 posts have been abolished. The southern Railway has surrendered 7,524 posts and in the eastern Railways, it’s more than 5,700. Sources said another 9,000-10,000 such posts may be abolished by the end of this current financial year after the approval from the Railway Board.
Officials said employees currently holding such posts are likely to be absorbed in the various departments.
The railways decide on the surrender of posts after carrying out work-study performance of employees across the zones. The studies also indicate the estimated savings due to surrendering such posts. Officials said the focus of such studies is to reduce the posts that are unproductive. “We can focus on getting more technical people who can contribute to our growth and operation rather than having a large number of support staff to carry letters and other documents,” said an official.
In recent years, the number of sanctioned posts in the railways has been declining due to outsourcing. The national transporter has taken this route to reduce the financial burdens on it, both in terms of salaries and pensions. Currently, railways spend half of its total income on salaries and pensions – 37 paise out of every one rupee earned on salaries of workers and 16 paise on pensions.