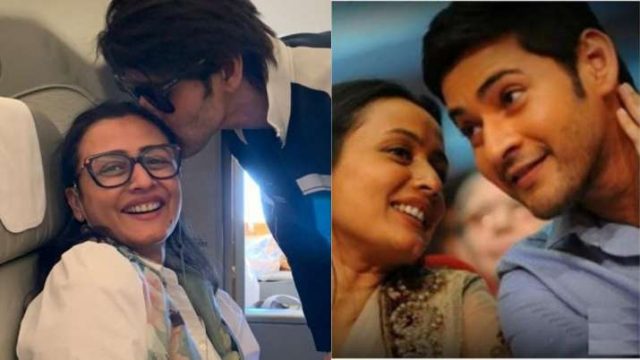 Former actress Namrata Shirodkar, known for her role in Vaastav: The Reality, Hero Hindustani, Vamsi and more, has turned a year older today. She is married to South superstar Mahesh Babu, who is already a household name thanks to his stellar acting skills and good looks. On Namrata’s birthday, let’s know how this cute love story started. Earlier, Mahesh Babu has revealed how his wife, used to be his crush when he was 26 before they eventually got married. Mahesh’s revelation came during a question-answer session he held on social media, where a fan asked him if he has a crush on anyone.

Meanwhile, Namrata met Mahesh Babu on the sets of the 2000 Telugu hit Vamsi. The two spent some quality time on the sets of the film and by the end of the shooting, it is said that they had begun dating each other. After being in a relationship for four years, the couple tied the knot on February 10, 2005 and welcomed their firstborn, Gautam, in 2006 and daughter Sitara was born in 2012.

Namrata Shirodkar was last seen in ‘Bride And Prejudice’, which released in 2004 is directed by Gurinder Chadha. The film also starred Aishwarya Rai Bachchan, Martin Henderson, Naveen Andrews, Sonali Kulkarni, Nadira Babbar and Anupam Kher. Aishwarya played the lead in the film, an adaptation of Jane Austen’s Pride and Prejudice. While Namrata played her sister, Martin Henderson played a version of Mr Darcy.