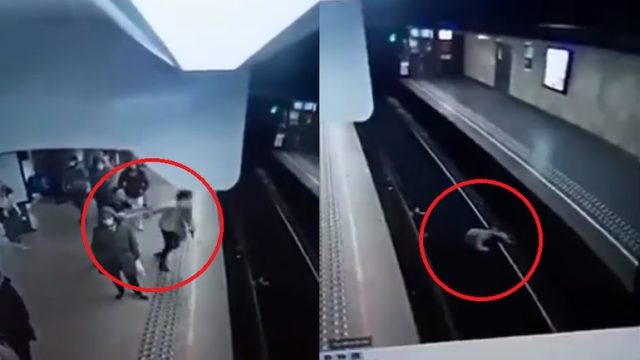 A man deliberately pushed a woman into the path of an oncoming subway train in Brussels. The hair-raising incident was caught on CCTV camera, and the video has since gone viral. Screengrabs of the CCTV footage shows the perpetrator pushing the woman onto the train tracks at Rogier metro station in Brussels.

A woman in Belgium had a miraculous escape after a man deliberately pushed her into the path of an oncoming subway train. The hair-raising incident was caught on CCTV camera, and the video has since gone viral.

The barely 30-second clip shows passengers waiting for a train at Rogier metro station in Brussels on Friday evening. As the train pulls into the station, a man in a black T-shirt sneaks up behind a woman and gives her a big shove. The woman loses her balance and tumbles onto the tracks, right in front of the approaching train.

Fortunately for her, the driver of the train applies the breaks on time. The metro stops inches away from the stunned woman, who struggles to get her bearings. Bystanders rush in to help her off the tracks.

The Brussels Times reported that the train driver had noticed the woman falling on the tracks and quickly hit the emergency brakes, which brought the metro to an immediate standstill.

Both the victim and the metro driver were taken to a hospital for treatment, after which they were allowed to go home.

“The driver reacted very well but is very much so in shock, as is the victim,” a spokesperson for the Brussels public transport company, which operates the metro, told Brussels Times.

The suspect, who had run away after pushing the woman in front of the train, was arrested later. He has been charged with attempted homicide. A psychiatric expert has been appointed by court to verify the his mental condition.

Further investigation into the incident is underway.