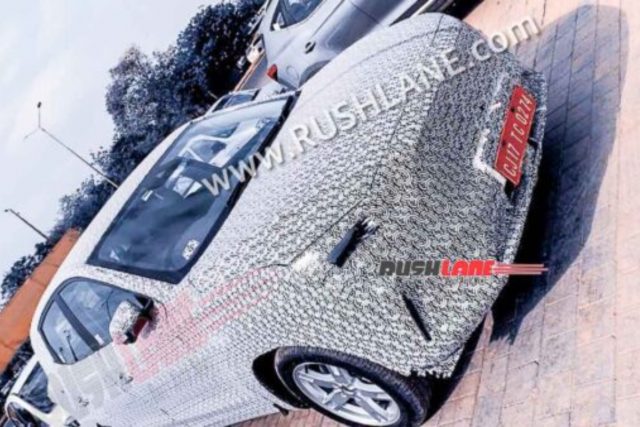 The ever-expanding EV market in India is all set to see a new entrant as British automaker MG gears up for the launch of the facelift version of ZS Electric in 2022. While the exact timeline of the launch is still not confirmed, a test mule of the MG ZS EV facelift model was recently spied with a Gujarat’snumber plate. The spy images accessed by Rush Lane feature a completely camouflaged version of the upcoming SUV.

Though the details of the design remain under wrap, the facelifted ZS EV appears to be based on the design language of MG Astor and the global version of ZS EV that hit the European market in October last year. The overall silhouette remains similar to the current model but the test unit appears to have a redesigned broader front bumper with larger air dam space.

The facelifted version sports the same set of 17-inch multi-spoke alloy wheels and much of the other design highlights are expected to remain similar to the current model.

Inside the cabin, the ZS EV is unlikely to receive any radical change but could come with a fully digital instrument console. The 10.1-inch touchscreen infotainment will be continued with connectivity options like Android Auto, Apple CarPlay and MG’s inhouse i-Smart connect car feature

While facelifts are usually not known for bringing drastic changes to the vehicle’s motors, MG reportedly could offer the new ZS EV with a smaller battery pack with an aim to cut the price. The upcoming model is likely to arrive at a smaller price tag than the current model. The details of the output tweak, however, aren’t confirmed yet. The current ZS EV comes packed with a 44.5kWh battery pack that offers a claimed output of 141 bhp and 353 Nm of torque. The model claims to offer a driving range of 419km on a single charge.

The vehicle comes with the option of a normal 7.4kW AC charger that takes nearly 6 to 8 hours to fully charge the battery and a 50kW DC fast charger that can juice the battery from 0 to 80 per cent in 50 minutes.

If MG manages to price the EV aggressively, it could see a good response from the buyers. The lower price also means that the MG ZS EV will look to give tough competition to Tata Nexon EV which is currently the best selling electric car model in India.