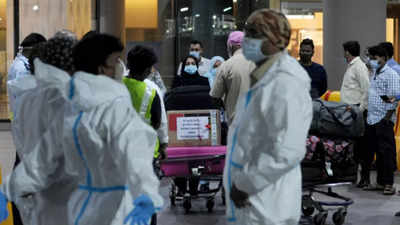 NEW DELHI: Airlines in India could make their highest-ever collective loss at over Rs 20,000 crore this fiscal due to twin blows of Covid impact on traffic and steep jet fuel prices, says rating agency Crisil.
It estimates a loss of 44% which is significantly higher than the FY21 loss of Rs 13,853 crore. This would push back industry recovery beyond fiscal 2023, it says.
Domestic air travel had staged smart recovery till early last month when Omicron again dealt a blow to it.
CRISIL Ratings director Nitesh Jain said: “The three large listed airlines have already reported a net loss of Rs 11,323 crore in the first half of fiscal 2022. The sharp jump in domestic air traffic would have cushioned the losses in the third quarter, but the net loss will increase significantly in the fourth quarter as the third wave has brought back travel restrictions and flight cancellations. As a result, we expect airlines to report steepest net loss this fiscal.”
Aviation turbine fuel (ATF) prices had hit an all-time high of Rs 83 per litre in November 2021, rising from an average price of Rs 44 in fiscal 2021 and about Rs 63 in April-June 2021.
While ATF prices declined 6-8% in December 2021 and January 2022 because of reduction in value-added tax by various states, they remain high at Rs 77-78 per litre, Crisil says.
Rakshit Kachhal, associate director of Crisil Ratings, says: “Persistent operating losses led to a 35% increase in debt (excluding lease liabilities) to above Rs 54,000 crore from March 2020 to September 2021. Continuing net losses will keep balance sheets stretched leading to a negative outlook on the sector.”
“In the milieu, airlines are likely to continue to conserve cash, including deferring maintenance as well as major capital expenditure, while renegotiating leases of aircrafts and keeping a leash on other fixed costs. Besides sustenance of cost control measures, a prolonged third wave, onset of newer variants and increase in competitive intensity with launch of new airlines are downside risks,” Crisil adds.
The third wave has already caused domestic air traffic to plummet 25% in the first week of January. A similar trend was observed during the second wave in April and May 2021 when air traffic declined 25% and 66%, respectively, on a sequential basis.