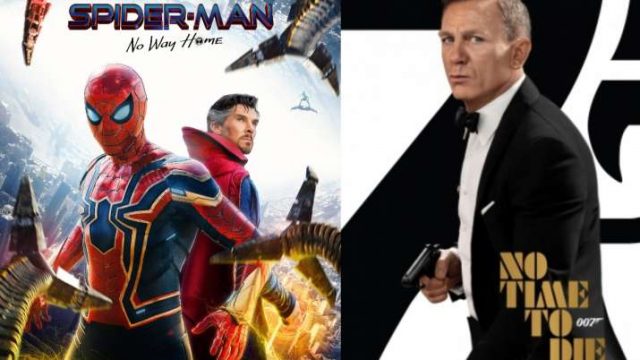 The Tom Holland-led ‘Spider-Man: No Way Home’ may be leaping from one box-office record to the next in this time of the pandemic, but audiences in the UK and Ireland have shown their loyalty to their favourite spy, James Bond, by ensuring that British actor Daniel Craig’s final outing as 007, ‘No Time to Die’, tops the 2021 charts.

According to data released by the media measurement and analytics company, Comscore, and reported by ‘Variety’, the year’s UK and Ireland box-office was led by ‘No Time to Die’, which is the No. 3 film of all time with 96.5 million pounds, behind ‘Star Wars: The Force Awakens’ (123.2 million pounds) and another James Bond movie, ‘Skyfall’ (103.2 million pounds).

‘Spider-Man: No Way Home’, which is still running in cinemas, is No.10 in the all-time chart with 74.8 million pounds and is most likely to overtake 2019’s ‘The Lion King’ (76 million pounds) and will then challenge ‘Titanic’ (80.2 million pounds) for the eighth position, reports ‘Variety’ quoting Comscore data.

Cinemas in the U.K and Ireland were closed for the first 19 weeks of 2021 and allowed to reopen from May 17, but unlike 2020, which had repeated closures, 2021 did not see any enforced shutdowns since reopening.

The final 2021 admission numbers are not yet available, but Comscore, according to ‘Variety’, expects the UK total to be around 74 million and some six million in Ireland, almost 70 per cent up from 2020’s figures of 47.6 million for the UK and Ireland combined, which represented a steep fall from 2019’s total of 191.1 million.

The UK/Ireland Top Ten, according to Comscore data for 2021, were: