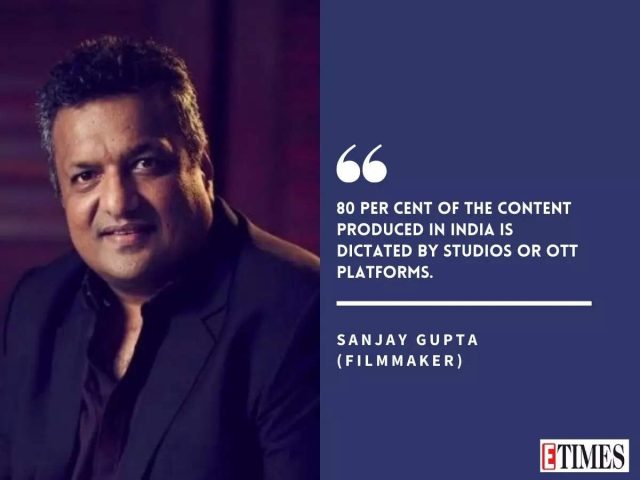 Unless you’ve been living under a rock, you’d have noticed a sudden Korean influence on your social media feed. A scroll down ours and there are friends going ‘chan!’ (cheers) over bottles of soju (rice wine) while they indulge in tteobokki and ramayeon, yet others raving about just how good is the Korean hack to smooth skin, or playing a ‘Squid Game’ inspired game—all from their Korean made phones. Of course, this is in addition to the several discussions going on about favourite K-pop stars or the latest tearjerker of a K-drama—content that introduced Indian fans to the Korean way of life in the first place. When ‘Parasite’ director Bong Joon Ho said, “Once you overcome the one-inch tall barrier of subtitles, you will be introduced to so many more amazing films,” during his Oscar-winning speech, little must he have known that just a few years down the line, the world would be willing to go cross-eyed trying to watch content from Joon Ho’s motherland. And all this with little to no promotion. At a time when publicity budgets are eating up into a film’s costs, Koreans seem to have cracked the formula to get their content noticed around the globe despite the obvious language barrier, and for it to make way for their culture to become a part of the world pop culture.

For a country that lifted its ban on ‘pleasure’ foreign travel only in 1989 after worries about foreign currency depletion at a time when the foreign debt was rising subsided, Korea seems to have come a long way. What began as a few films and dramas of note like ‘Swiri’, ‘Old Boy’, ‘My Sassy Girl’, ‘Autumn In My Heart’, ‘Winter Sonata’, testing waters globally, has now snowballed into a full-blown Hallyu wave that seems to be steamrolling ahead, full-speed and crushing in its way, all competition from regional content the world over. Like the United States of America did with its Levis jeans and Apple phones, South Korea is gradually influencing the pop culture of our times and emerging as a country to really watch out for when it comes to entertainment content, aided by the OTT wave, which, in turn, was boosted by the pandemic situation and lack of fresh content. India, too, is reeling under the heady influence of Korean content. While our filmmakers had been looking at the small East Asian nation for inspiration for long, now the audience is directly watching their films or shows without waiting for them to be remade.

But can the success of the Korean entertainment model be replicated by the Indian entertainment industry? At a time when our Prime Minister is urging the world to make in India and the government is offering several subsidies and impetus to filmmakers, is it too ambitious to imagine a time when Indian content will command a similar stronghold around the world, thus also, by extension, impacting other Indian businesses positively? ETimes’ #BigStory tries to decode the madness behind all things Korean and assess what it will take for India to replicate the K-model. Read on:

When it comes to their content’s global appeal, the one thing that seems to be working majorly for the Koreans is that they are keeping it very relatable. Take the K-Drama ‘Crash Landing On You’ for example. While the plot itself drew from the conflict of North vs South Korea—an issue most of us have no idea of—the love story it narrated was as fresh in Korea as it would be many miles away in Sweden. “They are staying true to emotions, which is a universal language,” points out filmmaker Sanjay Gupta, who has himself made remakes of Korean films like ‘Old Boy’ into ‘Zinda’ and ‘Seven Days’ into ‘Jazbaa’. Filmmaker Anand Pandit, who is in advanced talks to remake some Korean dramas, attributes the popularity of Korean content in India to how it aligns with Indian sensibilities. “The Korean psyche is quite linear with ours. It is cleaner, has family values, emotions, and a little bit of everything. It is almost packaged like an Indian film. They also have better technology and better writing (dialogues) and even the screenplays are good, so I personally like it,” he had said in an interview with ETimes.

While their content is easy to identify with, it is, in no manner, tailored to suit the tastes of the global audience. Korean shows are still talking about issues that plague their country, celebrating their own festivals, and even making content in their own language, banking only on the strength of their storytelling to take them to foreign shores. ‘Squid Game’ that is currently all the rage, addresses the wide class divide in the country and while all the games in the show, and the manner of playing them, is deep-rooted in Korean culture, it has managed to have the global audience captivated. “The reason for Korean content getting such adulation is because Korean cinema has dared to remain true to its roots instead of trying to imitate Hollywood cinema, which is the tendency in some of our filmmakers here. You can see their efforts to climb onto the Oscar platform and gain acceptance on the basis of the terms laid down by the Americans,” points out filmmaker Mahesh Bhatt. 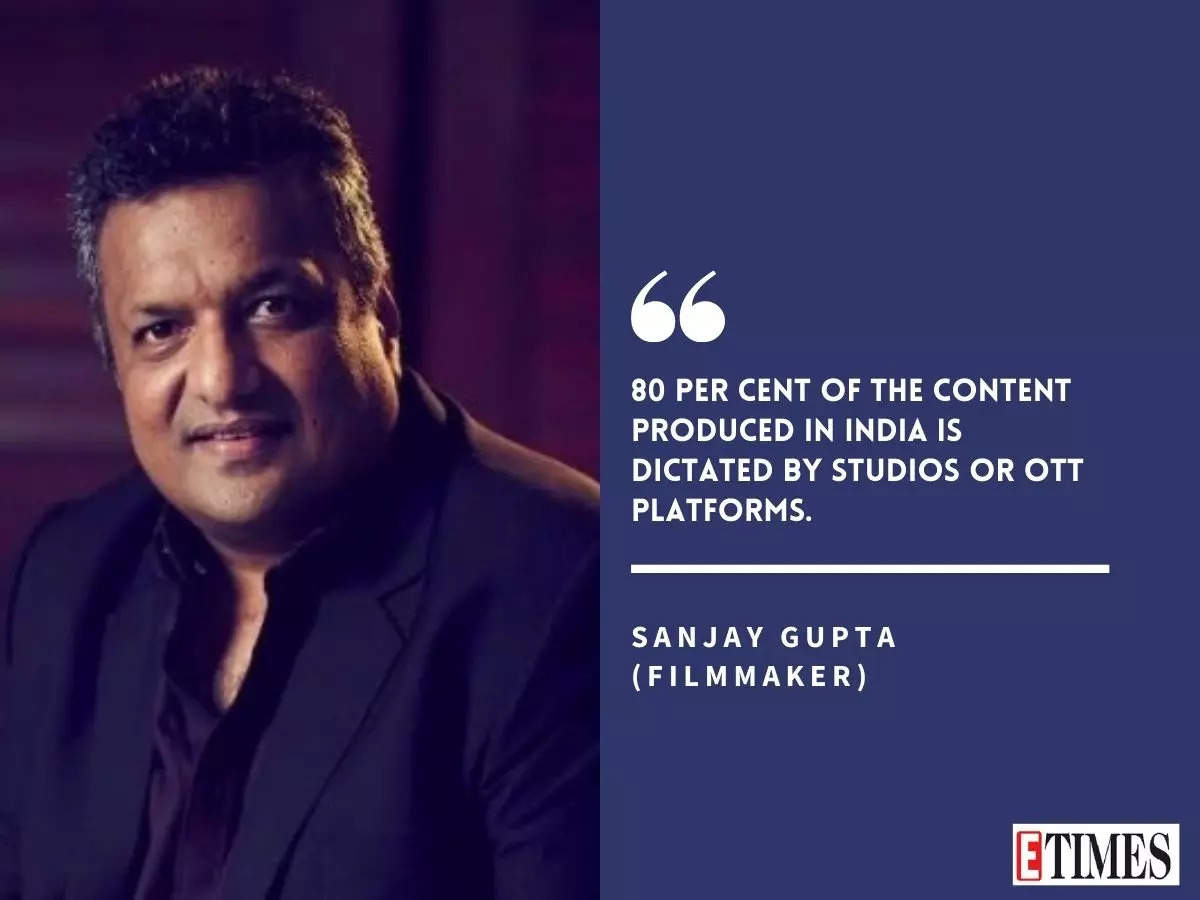 Gupta agrees with Bhatt, adding, “Eighty per cent of the content produced in India is dictated by studios or OTT platforms. They are primarily looking for a pan-India success instead of stories that will find universal acceptance globally. Their focus is not on the world stage right now”. Actress Kubbra Sait, who is currently making news for bagging the international show on Apple TV, ‘Foundation’ seconds the filmmakers when she attributes the reason for the success of Korean content to ‘the urge to entertain without defining the reason to do so’. “We are consumed by grabbing eyeballs and seats in the cinema halls. We are driven by hero-centric films. For eons now we’ve insisted and preached content is king, but we’ve treated it like the court jester. In recent times, smaller budget films, regional films, and stories that matter have always found their way to the heart of audiences. We are growing mentally and emotionally, hence we need content that caters to our sensibilities and our fabric too,” she insists. 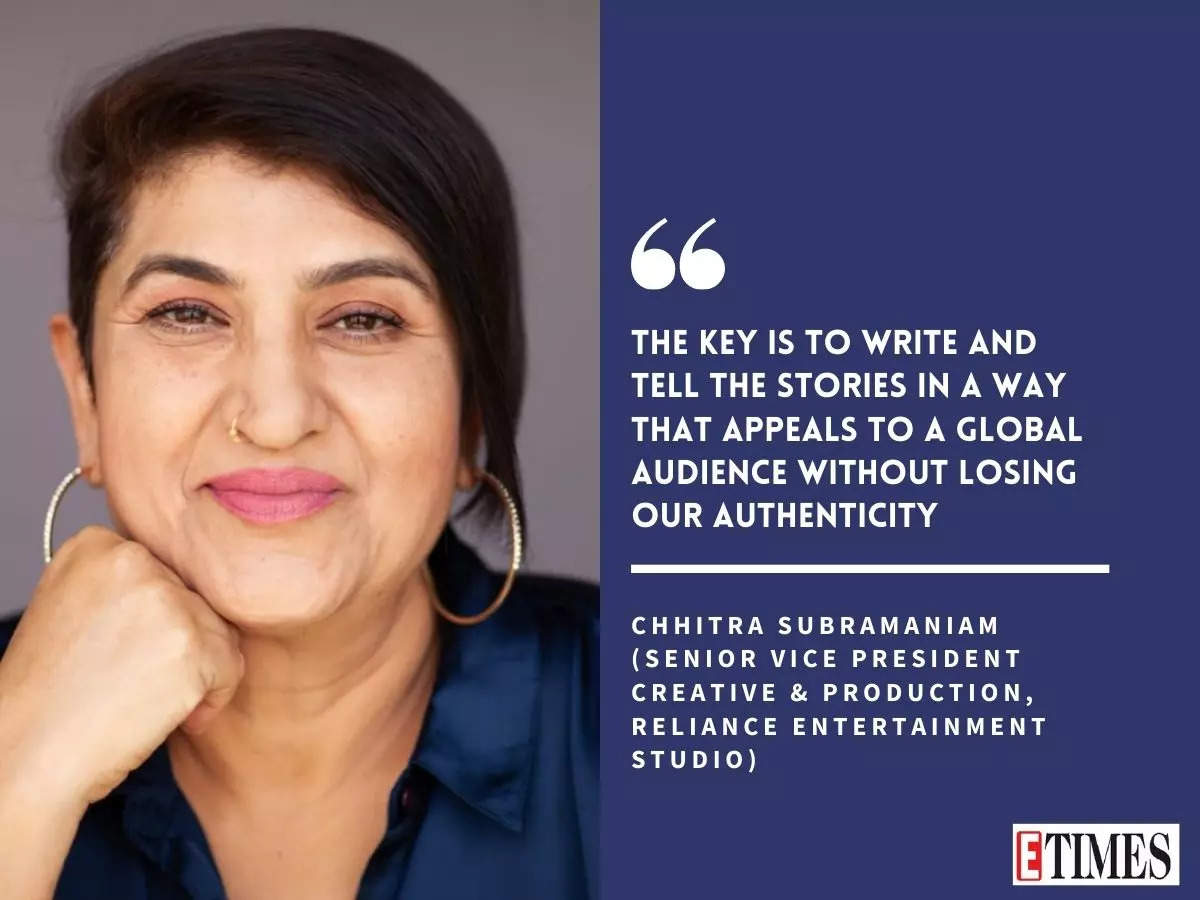 So, will the commerce-driven Indian entertainment industry never be able to reach the heights of its Korean counterpart? Chhitra Subramaniam, Senior Vice President Creative & Production, Reliance Entertainment Studio, is hopeful that it will. “There is huge potential in Indian stories and content. Going by how K-dramas and Korean content has exploded in popularity across the globe, Indian stories and content have huge potential as well to cut across a global audience. The key is to write and tell the stories in a way that appeals to a global audience without losing our authenticity,” she reiterates.

Subsidies and impetus are certainly helpful when it comes to filmmaking but to make entertainment content truly global, a country’s government should let its content creators explore. But apparently, that is not the case. “I hope, pray and wish that our content doesn’t further get subjected to political agendas and righteous behaviour. We need to eliminate the sacredness and our compelling nature to be offended by everything and everyone. Cinema is a form of art and storytelling… you can’t tailor-make it to suit everyone’s narrative. Let’s drive our honesty and truth,” lashes out Kubbra. 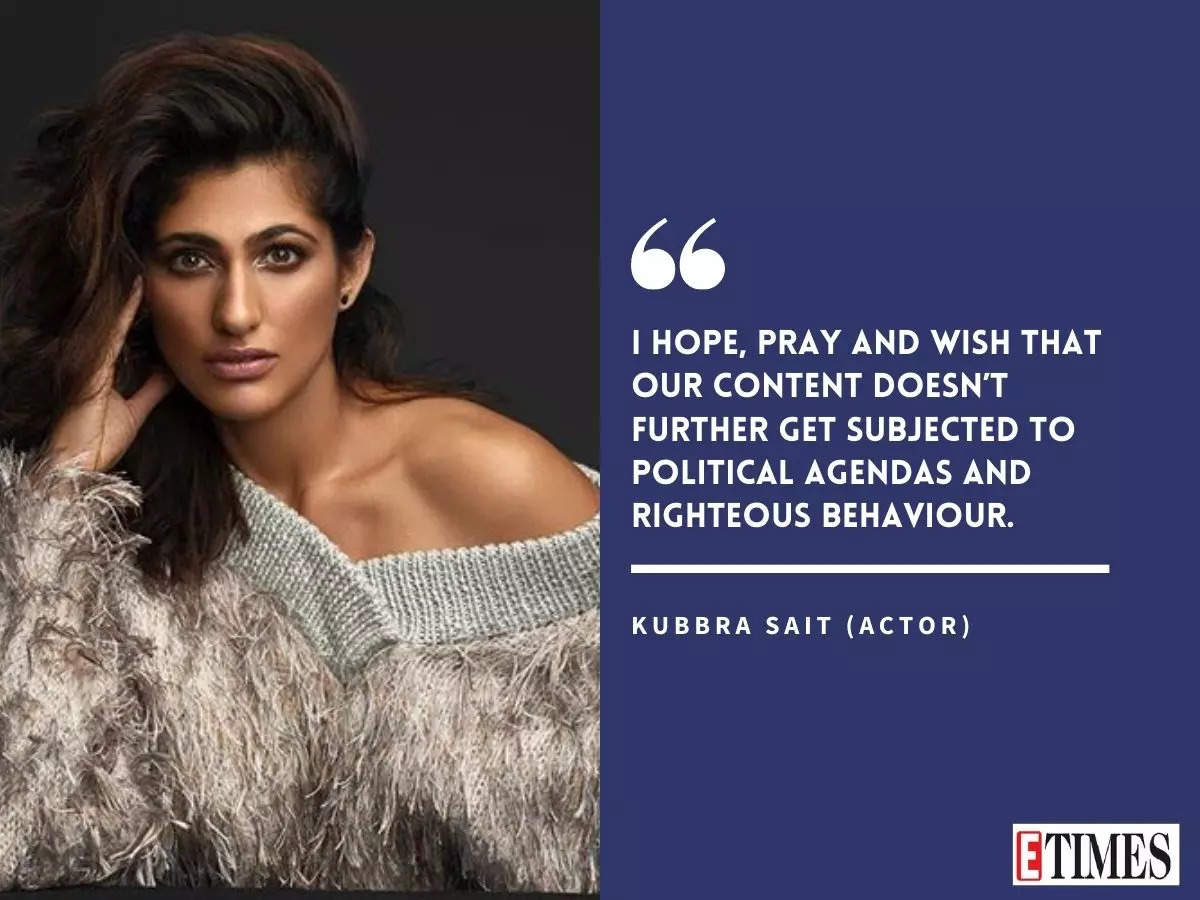 Informing how a show like ‘Squid Game’, made in 21 million dollars, has generated 900 million dollars, becoming the world’s most-watched show, Bhatt adds, “Netflix is investing 1 billion US dollars to generate Korean content in the forthcoming years. If Indian content doesn’t measure up to the content generated by Korean, Turkish, Iranian, Israeli entertainment industries, then it will be thrown in the dustbin because now the whole game has become global. You have to make content that resonates globally. We are so inward-looking, we haven’t looked beyond our frontiers. This is a major phase of transition. The government of the day and the subsequent governments should realise that unless you take away the thought-police on content creators, you’ll not be able to come to par with filmmakers of these nations. Neither will you have the thought-audacity nor the technical expertise required to make such content”. 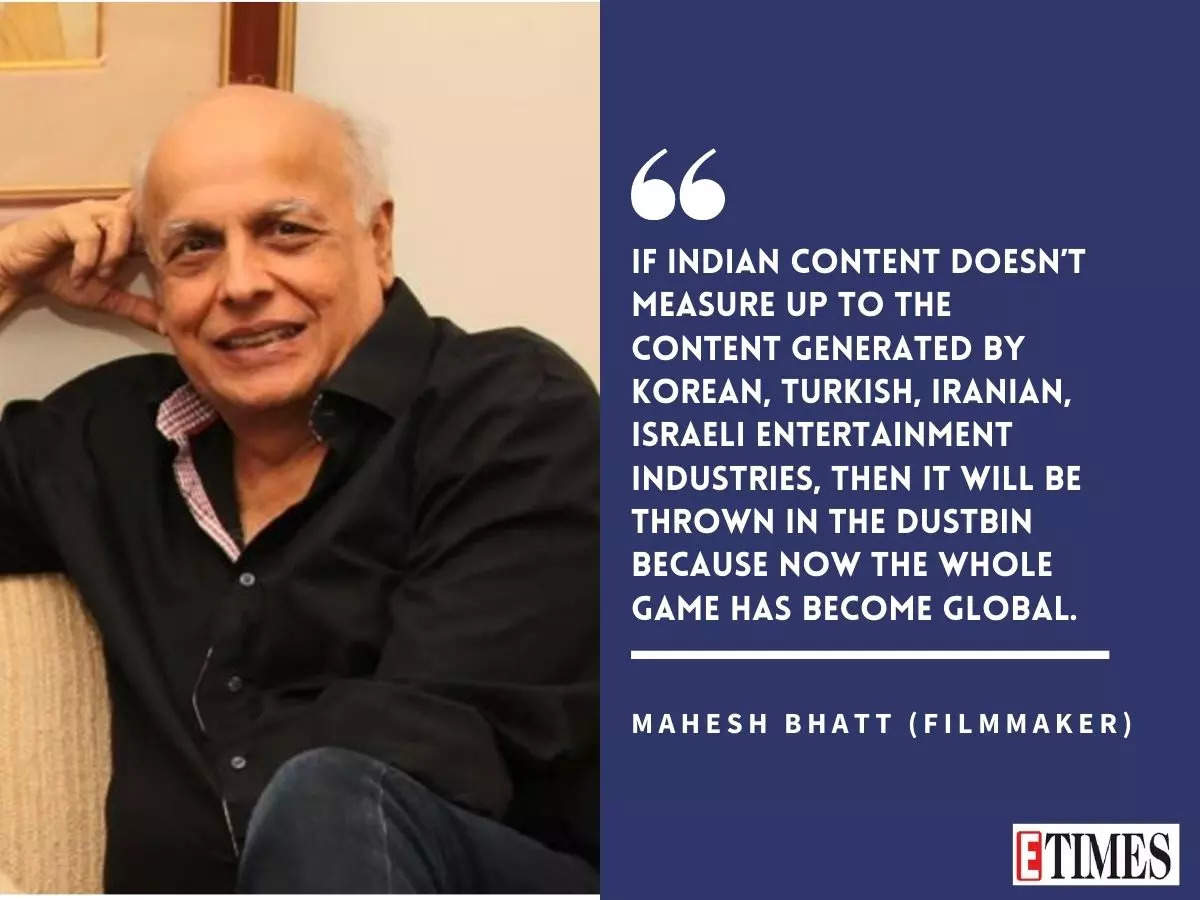 Subramaniam, meanwhile, suggests copying the Korean model to replicate its success in India. “The Korean Government took concerted efforts over two decades ago, to export Korean popular culture and post that, their government along with the chaebols (large Korean conglomerates) pumped in money and resources to create a conducive atmosphere for young storytellers to tell those stories. First, they banned censorship laws which provided immense opportunities and freedom to young talent to express newer ideas in newer ways. The government & chaebols funded the skilling of writers, talent and encouraged the eco-system to develop. They spent on operational excellence and fostered controversial never–seen-before topics. For India to grow more, the Korean learnings and impact are there for us to replicate easily,” she states.

Here’s hoping then, that the future of Indian content will soar as high, far and wide as its Asian counterparts.