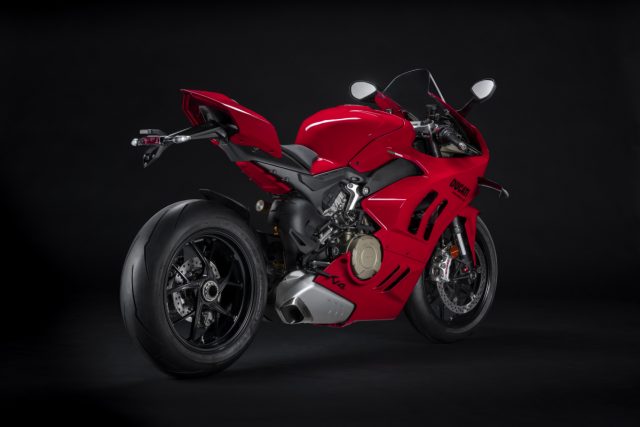 Ducati has gone ahead and unveiled the latest iteration of the famed Panigale V4, which has undergone a number of changes. In fact, the Italian superbike maker has made improvements to the ergonomics, aerodynamics, chassis, engine and electronics. Some of these changes may be subtle, but, provide a more enhanced riding experience, according to the boffins at Ducati. For example, the surfaces on the seat and tank have been changed to give greater ergonomic feedback. The 2022 Panigale V4 is also said to be better around the corners, thanks to increased fork travel. There’s also a new chassis setup and modifications to the engine which allows the new Panigale V4 to accelerate faster out of a corner.

Another significant change is the addition of more compact and thinner double-profile design wings and a redesigned extraction pocket in the lower part of the fairing. Then there’s the colossal Desmosedici Stradale, 1,103cc, V4 engine which gets a slight bump in power thanks to changes to the internals of the engine. The 2022 Panigale V4 now produces 210hp at 12,500rpm and 124Nm of torque at 11,000rpm. The gearbox has been improved too, specifically, the first, second and sixth, all of which have been lengthened to a certain degree for a greater experience on the track. Visually though, only the winglets and air slits are the real distinguishing factors from the previous-generation model. Moreover, the kerb weight is now down by 5 kilograms, bringing to total figure to 195.5 kilograms. The 5-inch TFT display also gets a few tweaks to make it easier to read while the 2022 Panigale V4 S gets new Ohlins NPX 25/30 semi-active forks which come with 5mm more travel than before (125mm). Other than that, the 2022 Panigale V4 pretty much remains the same as before except for a few minor subtle changes to improve the overall feel of the motorcycle. Both the V4 and V4 S will make their way to India, but in due course of time, of course – we expect sometime next year.

What you need to know about Italy's presidential vote

Why LIC’s big share sale is a big deal