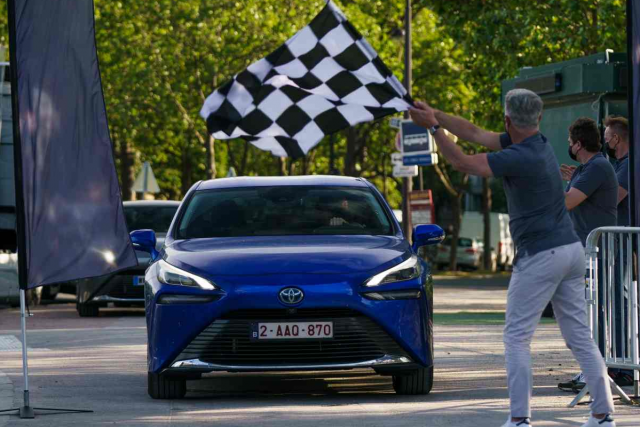 The imminent shift to alternate powertrains is now as clear as day. As the days of fossil-fuel dependent ICE engines near their end, most automakers have already dipped their toes in the pond and are working towards a shift from ICE engines to lithium-ion batteries. However, while the sea of EV manufacturers is being filled as we speak, a few of the companies are deviating to other forms of power sources such as hydrogen as a fuel in ICE vehicle.

Ahead of this, we have seen a handful of hydrogen-based fuel-cell electric vehicles (FCEV) – both in concept and production forms. However, for about a decade, despite several attempts, no carmaker has been able to push FCEVs into the mainstream spotlight, and as such, they continue to be a rarity. At this time, the only FCEVs in production are the Hyundai Nexo crossover and the Toyota Mirai. This is after Honda recently decided to pull the plug on its Clarity FCEV. Both the hydrogen-powered engine in the Hyundai and the Toyota cars use hydrogen to power the fuel cell, which turns the energy into electricity via a chemical reaction and powers an electric motor to propel the vehicle. Are FCEV Beneficial as Compared to ICEs?

The process is quite complicated and expensive. However, now Toyota is proposing a more direct solution I the form of internal combustion engines that run on hydrogen. With an FCEV there are a slew of aspects that needs to be taken into consideration. For instance, the vehicle carries hydrogen tanks, the fuel cell and the electric motor/s all married into one cohesive unit. The system also uses platinum, a rare ingredient that’s quite expensive, for the oxygen reduction reaction in the fuel cell.

A hydrogen ICE is essentially a traditional combustion engine converted to run on H2. An additional point is that these existing engines can be converted by changing certain components – such as the fuel delivery system and spark plugs – to use hydrogen instead of petrol or diesel, which means carmakers have a proven, time-tested base to build on and refine to further suit hydrogen applications, without making heavy investments on electric powertrains.

The primary purpose of using hydrogen would be to turn a car into an ultra-low emissions vehicle. With the combustion of hydrogen, the vehicle would mostly emit water vapour only. The reason why it isn’t a zero-emissions application is that a minute amount of carbon dioxide (CO2) is also emitted because of the burning of engine oil, and the combustion process in an H2 ICE leads to the emission of nitrogen oxides (NOx). While these emissions are significantly lower than petrol/diesel vehicles, FCEVs better H2 ICEs on this front, as they are true zero-emissions vehicles.

Compared to conventionally-powered ICEs, hydrogen ICEs only offer between 20–25 per cent efficiency, power output varies basis the energy density of the hydrogen/air mixture and hydrogen ICEs are also prone to knocking, which can negatively impact the engine durability as well as fuel efficiency. However, the last issue can be overcome with the help of an exhaust gas recirculation system.

Then there’s the cleanliness of hydrogen fuel itself. At present, the process of creating hydrogen mainly involves the use of fossil fuels, which contributes greatly to CO2 emissions. This is a counter-productive solution, and the ideal and cleanest alternative, green hydrogen (produced by harnessing renewable resources), is significantly more expensive, costing anywhere between $3.5 to $6 per kg. Any significant drop in the price of green hydrogen is unlikely to happen before the end of this decade. Until that happens, running a hydrogen vehicle – on any other form of hydrogen – may actually be worse for the environment than running a fossil fuel vehicle.

And then there’s the hydrogen fuel infrastructure itself. While charging stations for battery electric vehicles are being set up almost every day across the world, there are only a handful of hydrogen fuel stations in major countries, meaning movement in a hydrogen vehicle is hugely restricted. The cost of setting up a hydrogen station – which is said to range between $2 million to $3.2 million depending on the type of station – is prohibitively high in most markets, and with hardly any hydrogen vehicles on sale, investing in one doesn’t make much business sense at this point.

To further complicate matters, while filling up a hydrogen vehicle only takes a few minutes, there would still be a wait involved at a station – a wait of as much as 20 minutes, as there needs to be sufficient pressure in the storage tank to be able to supply hydrogen to the car’s tank, which otherwise can’t be filled up fully. In case of mass adoption, queues at stations would be serpentine and not every driver would have the time to spare.

Lastly, hydrogen vehicles have been left far, far behind by BEVs on almost every front. Range anxiety is fast becoming a term of the past thanks to BEVs with larger, more efficient battery packs, and electric vehicles will always pip hydrogen vehicles when it comes to performance. Charging times continue to drop every year, and quick and constant evolutions in battery technology will almost certainly lead to batteries only needing as much time to charge fully as needed to fill up an ICE vehicle’s fuel tank.

Where does India stand on the green hydrogen production front?

The pursuit of green hydrogen is gaining pace in India. State-owned GAIL India Ltd has recently announced it will set up a 10 MW green hydrogen facility – the country’s largest such plant – over the next 12-14 months. Reliance Industries chief Mukesh Ambani has said the company, as part of its clean energy business, is striving to bring down the cost of green hydrogen down to as little as $1 per kg by the end of this decade.

The Indian government has already outlined safety standards for the production of green hydrogen, and Union Minister Nitin Gadkari has, on multiple occasions, advocated the use of hydrogen as an automotive and industrial fuel, the adoption of which would help cut the country’s fuel import bill substantially.

Kamal Haasan is recovering well after being infected by Covid-19: Hospital

In numbers: How a renewed Covid surge is battering Europe