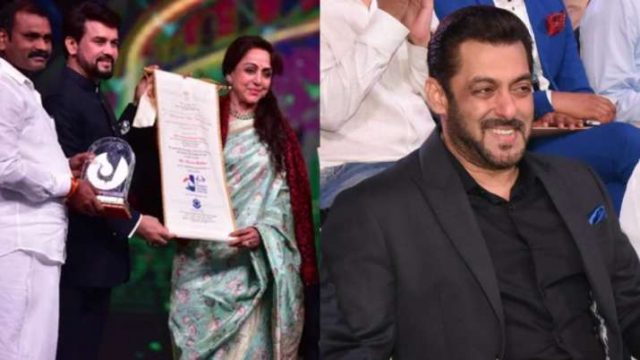 Actor-turned-politician Hema Malini on Saturday has been conferred with the Indian Film Personality of the Year 2021 Award at the 52nd edition of the International Film Festival of India (IFFI), which kickstarted in Goa today. Union Minister Anurag Thakur who presented her with the honour had earlier announced on Thursday that she would be given the award. The opening ceremony of the film festival was also attended by filmmaker Karan Johar and actor Salman Khan.

According to Thakur, Hema Malini and Prasoon Joshi’s contribution “to the field of Indian cinema spread over decades and their body of work has enthralled audiences across generations.”

While talking to ANI, the veteran said, “It’s a fruit of my labour over the years. As an MP also, I do various works of Mathura. So that also creates an impact on the audience as earlier I was a dancer, film artist, and now an MP.”

Union Minister for Information and Broadcasting Anurag Thakur during the event disclosed here that one line that had gone on to be etched in his memory was from Shimit Amin’s superhit film ‘Chak De India’, starring Shah Rukh Khan.

The I&B minister was engaged in a conversation with show host Karan Johar at the inaugural ceremony of the 52nd IFFI. It was at Karan’s prodding that he repeated the iconic line, after stating that it would be improper to quote just one dialogue in a country that had more than a billion people.

But certain dialogues, Thakur added, do get embedded in people’s memories and one of them definitely was what was spoken by Shah Rukh Khan’s character in ‘Chak De India’.

Founded in 1952, the film festival is held annually to celebrate the excellence of world cinema. This year, it’s being held from November 20 to November 28. The festival is conducted jointly by the Directorate of Film Festivals (under Ministry of Information and Broadcasting) and the Entertainment Society of Goa, Government of Goa. The festival provides the perfect platform for understanding and appreciating the film cultures of different nations in the context of their social and cultural ethos.

Omicron curbs by states may have hurt mobility in country