Actor Kangana Ranaut took to Instagram on Monday and urged the Maharashtra government to open up theatres in the state.

“Cases in Maharashtra have declined requesting Maharashtra government to #OpenUpCinemas in Maharashtra and save the dying film industry and theatres business.” She ended her note with folded hands emoticons,” she wrote in a note via Instagram stories. 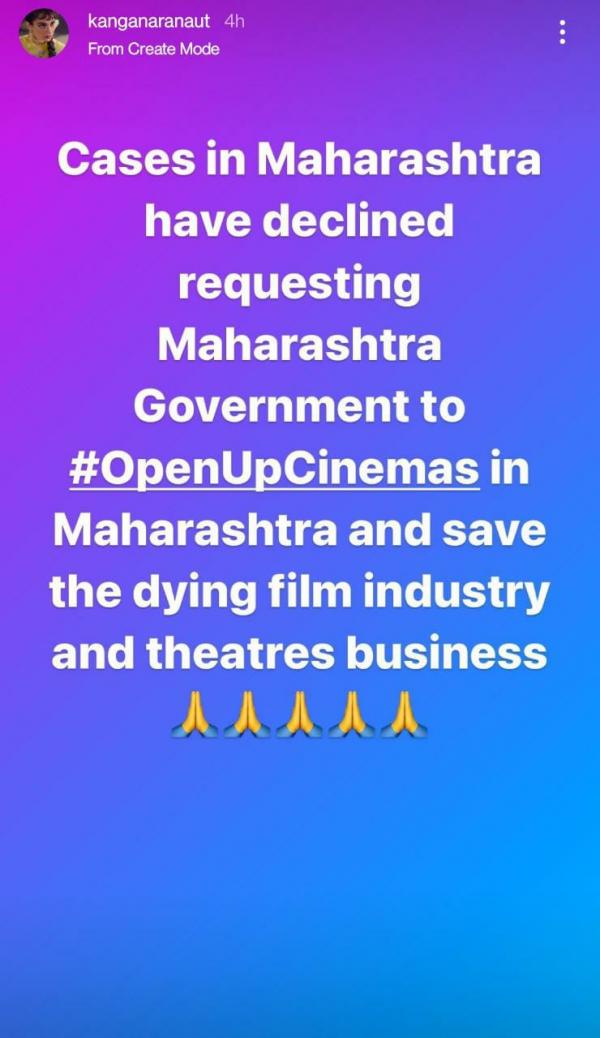 Amidst the ongoing coronavirus pandemic, theatres in Maharashtra were shut down due to the second wave, since April. However, lately with the decline in the number of cases, many have been requesting the government to open up theatres.

Kangana Ranaut, who recently returned from Hyderabad and Chennai after promoting her upcoming film, ‘Thalaivii’ urged the government to save the theatre as well as the movie business.

The makers are reportedly negotiating with the multiplexes to screen the film in Hindi as well. “We are disappointed that for the Hindi language version, ‘Thalaivii’ team has decided to offer only a 2 week window. We would like to appeal to Ms Kangana Ranaut, Mr Vishnu Induri & Mr. Shailesh Singh to keep a uniform window of 4 weeks across all language versions and therefore allow all cinemas across the country to showcase ‘Thalaivii’ to audiences, on the big screen,” Kamal Gianchandani, CEO PVR Pictures LTD, said in a statement.

Meanwhile, in an interview, Ranaut also spoke about the differences between Bollywood and other regional film industries. In an interview with YouTube channel named Tried & Refused Productions, Kangana opened up on the stark differences that she finds on working down south and in Bollywood.

“What is very striking about regional cinema is that at least they find some common ground. They’re chameleons, and that’s something that they resonate with… Whereas in Hindi films, because we’ve all migrated to Mumbai, there is so much diversity there, yet there is a bit of tension always… Everybody wants to pull everybody down, that’s not helping at all. It’s become such a toxic place that somehow, nobody is happy for another person, and we are not able to find a common ground we are able to identify with,” she said.

“A place where there is no love, no empathy, no sense of camaraderie, no sense of compassion, you can only imagine how toxic that place is going to be. Whereas regional cinema is going higher and higher, and we are also seeking some kind of place (in an industry) where people are so wonderful to each other. I hope it remains like that and too many people coming in here don’t ruin it,” she added.

(With Inputs From Pinkvilla)

Super compact C650 provides hotels, restaurants and cafés with the flexibility to adapt to...